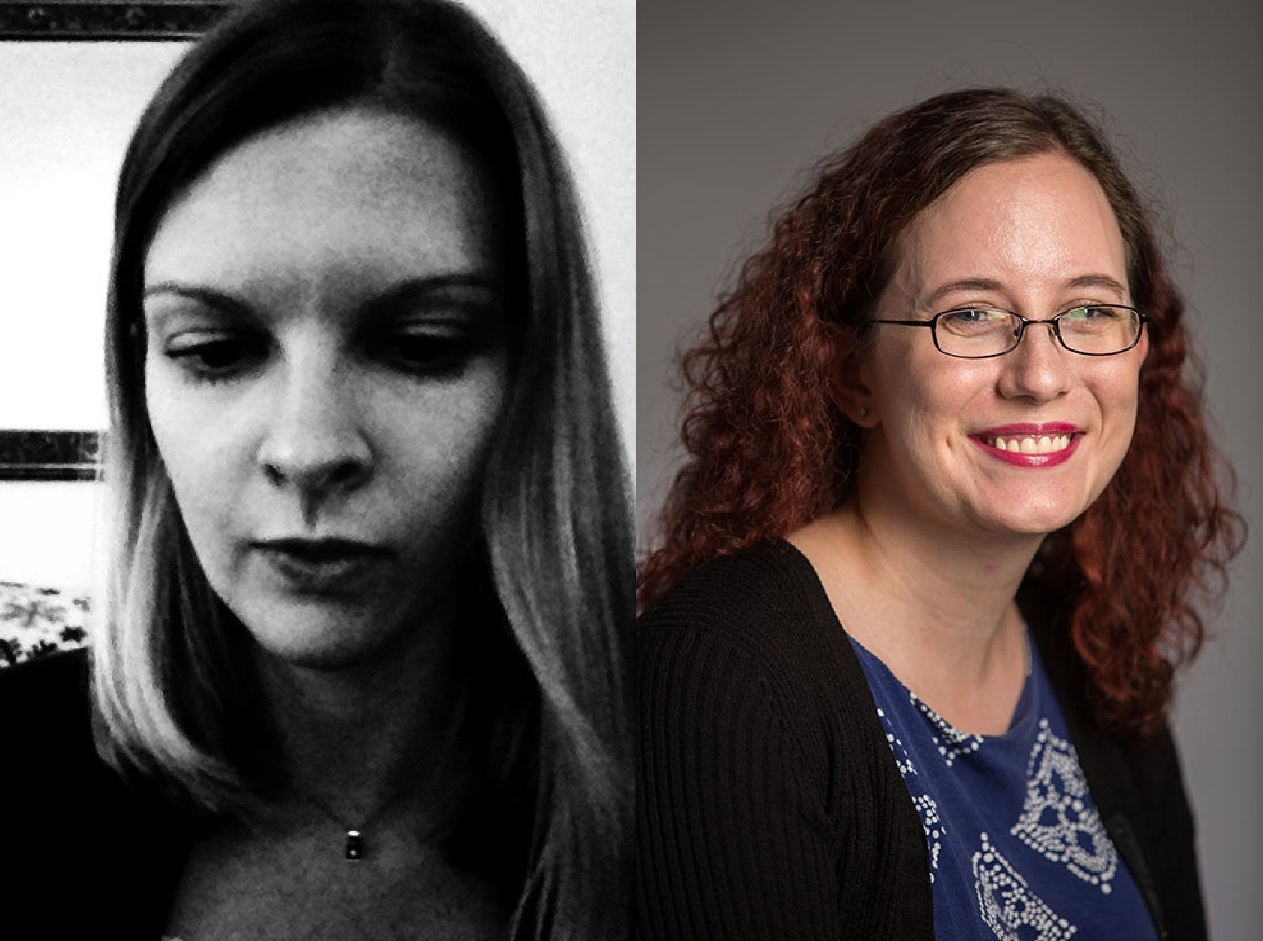 This week, we are breaking with form and profiling both Susan Cook and Elizabeth Henley, who co-authored the interdisciplinary article, “Reading Communities in the Dickens Classroom” (Pedagogy April 2015). It’s a bit of a longer read than normal, so grab a cup of coffee and enjoy!

Susan Cook is an Assistant Professor of English at Southern New Hampshire University. Her publications include “Season of Light and Darkness: A Tale of Two Cities and the Daguerreian Imagination,” (Dickens Studies Annual, Summer 2011), and “Envisioning Reform in Gissing’s The Nether World” (English Literature in Transition, 1880-1920, August 2009). She is a 2011 recipient of SNHU’s Faculty Center Teaching with Technology Innovation Award.

Elizabeth Henley is an Assistant Professor of Information Technology at Southern New Hampshire University. She has done presentations on assistive technology and Universal Design, and enjoys working on the integration of technology into other fields. She has taught courses on business information systems, the development of mobile apps, and is developing new elective courses for the program.

19 CENTS: Susan and Elizabeth, you collaborated not only on this article but also a class that explored the continuum between old and new media, specifically around reading Dickens and digital communities. What moment or commonalities in research / pedagogical interests lead you to collaborate in the classroom and on this article?

COOK: Liz and I have frequently discussed our work with one another. While Liz’s field is IT, she has a background in literature, so we have a lot of common ground. My early thinking about the course came out of a conference panel I attended at the Victorians Institute Conference in 2011. The panel centered on technology and pedagogy, and the digital projects described by the presenters were really inspiring to me. I mentioned it to Liz, and out of that conversation we began to discuss ways to integrate technology into my Major Author Studies course. Liz and I developed the project together and she came to the class three or four times during the semester to help me explain the project and to assist the students as they developed their collaborative websites.

HENLEY: My doctoral work was in educational technology. As such, I have a strong interest in not only IT, but also integrating technology into courses and seeing how technology impacts other fields. In addition to that, I was an English major as an undergraduate. Susan and I knew each other and had talked about our fields before. She had mentioned an interest in integrating technology into one of her courses, and we met to brainstorm different ideas and what would be the best fit for the class. Beyond seeing what students thought about these two different ways of creating communities in the classroom, I also was interested to see how students chose their platforms for the project. I was able to go into Susan’s class a couple of times to show them the different options they had, help them when they were working on their sites, and see their presentations.

19 CENTS: Susan, as a scholar-teacher of the nineteenth century, what did you learn about your work on the past by concretely connecting it with digital scholarship?

COOK: In an earlier draft of our article we began with the E. M. Forster quote, “Only connect.” Our primary goal for our students with this project was connection—with one another and with the material. We wanted our students to feel they were part of a community of readers, and to see how that community connected—and when it did not connect—with the kinds of reading communities common in Dickens’s era. Going into the project I thought that the digital component might stretch and test this transhistorical connection, and I still agree with this assessment. I think for me the value of digital humanities scholarship in projects such as this one is the way it presents new pedagogical opportunities for helping students connect with the material. At the same time, I think we were all aware that the digital platform provided a simulation of the type of nineteenth-century reading community we were studying. This awareness was more pronounced because we were studying interpersonal connection itself.

19 CENTS: Elizabeth, what did you learn about the nineteenth century during this project that you may never had if you had not collaborated with Susan? In what ways do you think nineteenth-century scholars-teachers can productively collaborate with IT scholar-teachers such as yourself?

HENLEY: I think the biggest thing is to just talk to your colleagues. I feel very lucky that where I work right now doesn’t have silos for departments or schools, and so there are a lot of opportunities to talk to faculty in other disciplines. This is through both school professional development opportunities and social functions. Those connections with other faculty, and conversations about what you’re researching or doing in your classroom, can lead to some very interesting partnerships.

One thing I learned during Susan’s course was about the reading communities that were popular in Dickens’s time. In terms of our project, one of the interesting parts was to hear how much the students enjoyed the oral reading component of the course. There’s this assumption that students now are so into technology and digital environments, and how that might negatively impact how they react to other forms of communication. However, the students in the class really enjoyed the oral project and seemed to connect to that more than the digital project.

19 CENTS: What nineteenth-century events or scholars do persons in your field look back on as having had a significant impact on IT?

HENLEY: The industrial revolution is an event that I think has had an impact on IT and especially with what we see in the workplace. You still see similar trends coming up with the automatization of work that was done by people before. This is an area that Susan and I have had additional conversations about how our two fields relate to each other. In fact, we’re going to be co-teaching a course in the fall on the industrial and digital revolution. In that class we’re going to spend the first third of the class looking at the industrial revolution and its prehistory, the middle third of the class will be a Reacting to the Past game titled “Rage Against the Machine: Technology, Rebellion, and the Industrial Revolution,” and the last third of the class looking at 21st-century technological development in the age of globalization. This came about from us both attending a workshop on Reacting to the Past games, as well as our previous conversations while working on the project in her class.

19 CENTS: Elizabeth, what was the last experience that made you a stronger scholar-teacher?

HENLEY: In the fall semester, I did a pilot version of one of our IT courses. In this pilot, there wasn’t a traditional print textbook and students could test out of software tutorials for skills that they already had. Part of these changes was based on my own experiences with the class. In addition, I collaborated other faculty, including someone who had taught another introductory level class in a different discipline and what their experiences with using free class resources were. As this is a course that is part of our general education program, I really had to look at the content and decide what were the key elements that everyone should know. In addition to that, I wanted students to have a better understanding of some of the big issues that are related to technology. At the end of the pilot, I used my observations of the course as well as student feedback to make some updates for the spring semester version of the class. This has been an interesting area of research that was not just about IT, and it really made me think more about how the class is structured and how to better engage students with the content.

19 CENTS: What was the last experience, Susan, that made you a stronger scholar-teacher? And what did you learn about the 19th century during this particular project with Elizabeth that came about by collaborating with a digital scholar?

COOK: I just finished a two-year appointment as the Director of Undergraduate Research at my institution. This gave me a real panoramic view of student scholarship across the disciplines, and also reinforced to me the value of continuing with my own research projects. Many of our undergraduate student researchers may never go on to graduate school, but their experiences engaging in scholarly research projects are introducing them to methods of inquiry and sharpening their mental focus—and this will be extremely useful to them as they go on to whatever is next for them in life. So on the one hand, having this broad view of student research has allowed me see the value of my own research and the work I do in my classroom from another angle. But I could also answer this question by saying that it is the individual conversations I have with my students every day that (I hope) make me stronger as a scholar-teacher. The more we can all form intellectual connections, the more resonant the lessons. I learned from this particular project that I need to pay more attention to multi-media adaptations of the texts I teach. I tend not to focus on them, but Liz’s suggestions for this project really helped me think outside of the box.

19 CENTS:  Susan, in which directions do you think nineteenth-century scholarship should evolve in the near future?

COOK: I don’t think I could choose one direction. One of the things I appreciate so much about this field of nineteenth-century scholarship is its diversity. I love attending nineteenth-century studies conferences, such as NCSA, NAVSA, Victorians Institute, or the Dickens Universe and learning about all these different methodologies and subjects. The diversity of scholarship in our field is invigorating.

19 CENTS: What advice do you have, Elizabeth, for nineteenth-century scholar-teachers in the humanities on how to incorporate Digital Humanities / New Media / IT practices and / or theories into their scholarship or teaching?

HENLEY: I think the biggest thing is to just talk to your colleagues. I feel very lucky that where I work right now doesn’t have silos for departments or schools, and so there are a lot of opportunities to talk to faculty in other disciplines. This is through both school professional development opportunities and social functions. Those connections with other faculty, and conversations about what you’re researching or doing in your classroom, can lead to some very interesting partnerships. For example, Susan and I were talking about a new course I’m developing for the fall on technology and art. As part of that conversation, I found out that she had a lot of experience with traditional photography, and she’ll now be coming to share some of the knowledge as a guest speaker for the class. I’ll then use that to make a connection to digital photography and the differences between those types of photography.