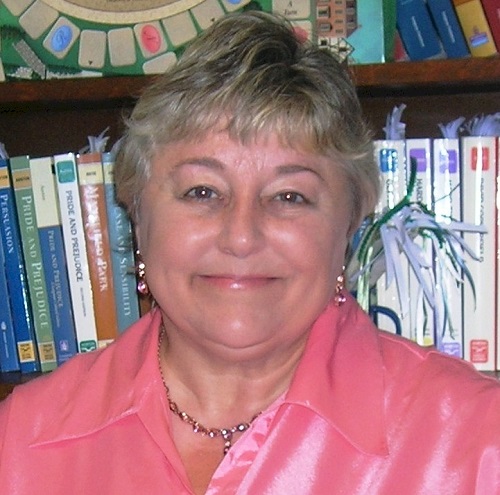 Dr. Brenda Ayres is a full professor of English and member of the graduate faculty at Liberty University in Lynchburg, Virginia, where she has taught since 2003. She has published extensively in eighteenth- and nineteenth-century literature with a total of over 170 articles and 32 book publications. Her 2017 book publications are Biographical Misrepresentations of British Women Writers: A Hall of Mirrors and the Long Nineteenth Century (Palgrave Macmillan), Betwixt and Between the Biographies of Mary Wollstonecraft (Anthem). In 2018 she will publish Marie Corelli: Woman Writer Warrior, Victorians and Their Animals: Beast on a Leash, and hopefully at least two if not four more books on Wollstonecraft that are ready for publishers.

If you had the ability to tour the nineteenth century for one hour and you could visit as many places / events as you could, regardless of distance, how would you build your itinerary? I would love to go to Whitby, a port in Scarborough in the county of North Yorkshire. In many ways I have already visited there in the nineteenth century through reading the novels of Mary Linskill (1840-1891). Linskill gives such a realistic depiction of what Whitby was like in her century, especially in The Haven Under the Hill (1886), but because I want to write her biography, I need to match check reality against my imagination. I would stay at Linskill Cottage at Newholm-cum-Dunsley, Spring Vale, the house that Linskill had built from the proceeds of her books.

Above all, I want to be inside the Whitby Abbey. It was a spiritual experience for Linskill, and I’m sure it would be the same for me. The first monastery at its site was  founded in 657 AD by the abbess Lady Hilda, the grand-niece of Edwin, the first Christian king of Northumbria. Caedmon, an illiterate cow-herder at the abbey, heard a song by an angel celebrating God’s creation of the world. He memorized the words and was able to play and sing it to Hilda. She knew that it came by divine inspiration if for no reason other than it contained words unfamiliar to Caedmon. Once written down, Caemon’s Hymn became one of the earliest poems in Old English whose author is known, thanks to Bede’s Historia Ecclesiastica. Hilda (later St. Hilda) invited Caedmon to take monastic vows, after which he became a zealous monk, and he and she converted many Anglo-Saxons to Christianity.

Besides the abbey, I want to spend time in St. Mary’s, a stone church that was founded also by St. Hilda, and then rebuilt as a Norman church in 1110. The graveyard is not the resting place of Linskill though. That would be Larpool Lane Cemetery, which would also be on my itinerary, but it was the site of “something dark … whether man or beast” in Stoker’s Dracula.

So many literary notables visited Whitby and then set scenes in their novels of the town and beach, that it must be quite an inspirational place in which to linger. A lot of people lost their lives off its tempestuous shores as well, so I am thinking that serenity is not one of its attributes.

What is the movie, TV show, or book set in the nineteenth century that has most resonated with you? I have nearly worn out my Elizabeth Gaskell Collection which includes North and South, Wives and Daughters, and Cranford. This is a BBC miniseries, released in 2008. BBC, in my opinion, is unsurpassed in its brilliant novel adaptations. If pressed, of the three films, I would have to choose North and South. The cinematography is artistic, like the scene inside Thornton’s factory when it is “snowing” cotton, and the musical background transports you back to the day. I simply cannot imagine anyone more perfect to play the parts of Margaret Hale and John Thornton than Daniela Denby-Ashe and Richard Armitage. In truth, I liked Armitage in the film better than I liked Thornton in the novel. In fact all of the characters were irreplaceably cast. There is no better kiss in all filmography than the one at the station. How can such a small place like England produce such incomparable writers and actors? Sue Birtwistle, Susie Conklin, Sandy Welch, and Andrew Davies are simply incredible screenwriters. The Brits have truly given the world so much beauty in its literature and films, and I will always be grateful.

What nineteenth-century sound would you love to hear? I’d like to hear someone say and mean it, “I’m all astonishment” or “I’m all amazement.” Otherwise, I would love to hear vendors singing in Bloomsbury Square or Park Crescent “Who Will Buy?” or did that happen only in the musical?

If you threw a nineteenth-century themed party, what would it be like and what would it be for? I have thrown a number of such parties for my Victorian Society—a club that I started in Lynchburg, Virginia, that included students, faculty, and staff from Liberty University, and townspeople. My favorite were the Christmas parties when I would make shepherd’s pie or Yorkshire pudding, ask folk to dress in costume, have them bring homemade Christmas gifts to exchange, and show off my house and tree decorated with Victorian ornaments. I also invited students over to watch A  Christmas Carol marathon, beginning with the 1938 movie with Reginald Owen up through the 2009 film with Jim Carrey. Another tradition was to have students over on Halloween to watch Frankenstein withKenneth Branagh, Wuthering Heights with Laurence Olivier, and Dracula with Bela Lugosi. But my favorite memory was a fondue party for about thirty students on Valentine’s Day with a showing of Pride and Prejudice which had just come out, starring Keira Knightley. Even the guys loved it.