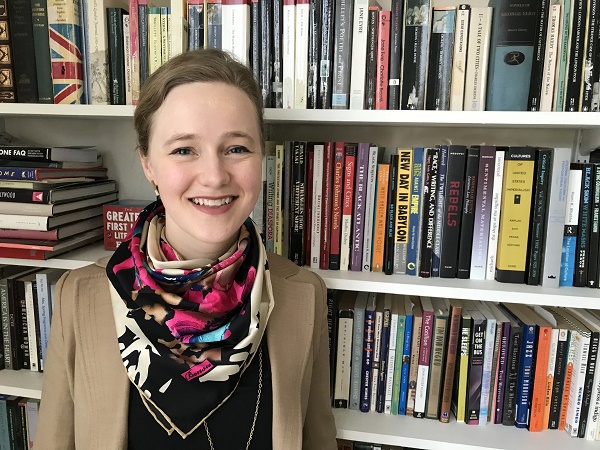 Ruth M. McAdams is a Visiting Assistant Professor in the English Department at Skidmore College, where she studies in nineteenth-century British literature and teaches a broad range of courses in literature and writing. Her book project analyzes connections between Victorian literature and philosophy of history, looking in particularly at the way the Victorians theorize the present in distinction from the recent past of the Regency period or the Napoleonic Wars. Her articles have appeared or are forthcoming in Victorian Studies, Nineteenth-Century Contexts, and Pedagogy. In her free time, she plays the oboe and has been getting into swimming.

What was the last experience that made you a stronger scholar-teacher? In the 2016-17 academic year, I taught at Boğaziçi University in Istanbul, and it was an incredible year that really made me grow in myriad ways. It’s almost impossible to choose, but one experience that stands out was teaching The Tempest. I was initially pretty worried about the cultural politics of it—I didn’t want to be a Miranda to my students’ Caliban. I somewhat naively assumed that the students would identify with the colonized, but was surprised to realize that many, steeped in the history of Ottoman conquest, saw themselves in the role of the colonizer. In retrospect it makes perfect sense, but it threw me for a loop in the moment. Among other things, the experience taught me not to be too confident about the relationship between the structures of power represented in the text and the structures of power shaping higher education. These two realms demand to be related to each other, but the relationship is complex and elusive.

What is something you learned in the last month about the nineteenth century? I recently read a lecture delivered by the German philosopher of history Leopold von Ranke in front of King Maximilian II in 1854. I was amused to discover that it included what must have been a particularly stressful post-lecture question-and-answer session in which Maximilian himself pressed Ranke on the implications of his ideas! It throws into relief the average hostile question after an academic conference paper, but it also has a darker resonance with our new authoritarian political climate.

What was the last book you read? Between volumes of Elena Ferrante’s Neapolitan Novels, I picked up Souad Mekhennet’s I Was Told to Come Alone: My Journey Behind the Lines of Jihad, which was fantastic. Mekhennet is a German journalist of Turkish and Moroccan descent, and the book discusses her upbringing, her experiences of racism and Islamophobia, and the development of her career chronicling international jihadist movements. There are numerous breathtaking anecdotes, but as an American, I was blown away by Mekhennet’s staggering language abilities. At one point, she’s in the back seat of a car, with a jihadist interviewee in the front who is trying to conceal his identity, and despite the road noise, she deduces that although he’s speaking in Egyptian Arabic, his accent indicates that he’s Moroccan. She gives a captivating account of the way that Islamic militancy is inspired by a coherent and fully fleshed-out alternative world history, in which events that for me rang only distant bells constitute the main through-line. Prior to reading the book, I considered myself pretty knowledgeable about these issues, but as I read I felt the world open wider and wider and wider with things I don’t know.

What was the first nineteenth-century-themed item you bought with your own money? When I was about 13 and at the height of my babysitting career, I bought Anna Karenina and a really cool metal bookmark that clipped onto the page, and I read it slowly that summer. I loved the complexity of the plot and the huge cast of characters, but Anna’s predicament went over my head emotionally. My sister, spoiling then ending, told me that her friend Anna was named after Anna Karenina, and I found that mind-boggling—why would someone name their child after such an unlikeable character? I’m somewhat embarrassed to admit that I didn’t get why Anna was unsatisfied in her marriage, or how she was caught between confining, contradictory expectations for women. At that time in my life, I really did not understand the insidious power of the patriarchy. I still haven’t re-read Anna Karenina, but I’m sure I’d feel very differently about it today. I don’t frequently envy the innocence of youth, but I do miss the sincere confusion of my first encounter with the fallen woman narrative.

If you had the opportunity to go back to the nineteenth century and have one two-hour dinner with one person, with whom would you want to dine? This might be cheating, but I’d want to attend a salon with one of the great literary hostesses of the 1820s and 1830s, Lady Holland or the Countess of Blessington, in order to get some inspiration for my own hospitality. I love the idea of being a great hostess, but it does not come naturally to me—it looks effortless, but is actually really hard.