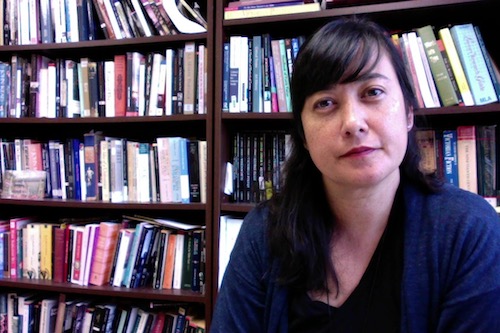 Elizabeth Hope Chang is Associate Professor of English at the University of Missouri, where her teaching and research center on the literature and culture of the British Empire. She is the author of Novel Cultivations: Plants in Global British Literature (University of Virginia Press, 2019), as well as Britain’s Chinese Eye: Literature, Empire and Aesthetics in the Nineteenth Century (Stanford University Press, 2010) and has also published on, among other topics, Chinese plants in British gardens, British accounts of Chinese foot-binding, and Victorian science fiction. Her current project concerns British travel writing from the interior of China.

Which nineteenth-century historical event has been most influential for your work and for your thinking about the nineteenth century? The looting and burning of the Qing Summer Palace (Yuanming Yuan 圓明園) by Anglo-French forces in October 1860. As someone interested in the British empire generally, and in the relations between Britain and China specifically, and also as someone interested in gardens and material culture, this singular act of destruction absorbs me. In its immediate intentions, the destruction made a formal garden space answerable for events of the battlefield, and so redirected an imperial clash onto the art objects of empire. In its long-term consequences, the destruction directed Sino-British relations for the rest of the nineteenth century (and indeed long after) as well as reshaped international relations more generally. The legacies of the nineteenth century are many, but this particular confrontation has, I think, produced more regret and revenge than most, and certainly more than we have yet adequately reckoned with.

What is most difficult and what is easiest about teaching undergraduates about the nineteenth century? Victorian novels are very long, and undergraduate students are very busy. Also, a lot of Victorian authors make students very angry. How dare they!—write so much, write so densely, or with so much disgust about the poor, about women, about nonwhites, about non-Christians, or any other topic that earned the scorn of a nineteenth-century Briton’s critical eye. But this also is the easiest thing about teaching undergraduates about the nineteenth century novel—that so much of what concerned authors then still interests students now, even if their worldview is shifted. And, of course, those novels are so long because they are so full of plot and character—all the surprising and delighting and infuriating twists and turns that give the novels their dense complexity, and that make them (once begun) irresistible.

If you were an artist in the nineteenth century, what would your medium be? And what or who would inspire you? Setting aside my first and more boring answer, which would be to have both the skill with oil paints and acute insight into human character of John Singer Sargent, what about wax flower modeling? The inspiration from exotic plant life was ever-increasing across the nineteenth century, and the beautifully intricate arrangements are both underappreciated and ephemeral.

What form of nineteenth-century transportation would you most like to experience? The elegant sound of the word “barouche” would make it very satisfying to declare as an intended form of transport, even if the experience of riding in one might not live up to expectations.

If you could hold any political office or sit on any throne in the nineteenth century, which would it be? Avoiding personal installation in official positions, I’d like to be a silent observer of the court of Queen Lili‘uokalani, last monarch of the Kingdom of Hawai‘i. Her loyalty both to her supporters and to the ideal of Hawaiian sovereignty, against the extreme pressures of the American businessmen and politicians who had other plans for the islands, would be something to see.