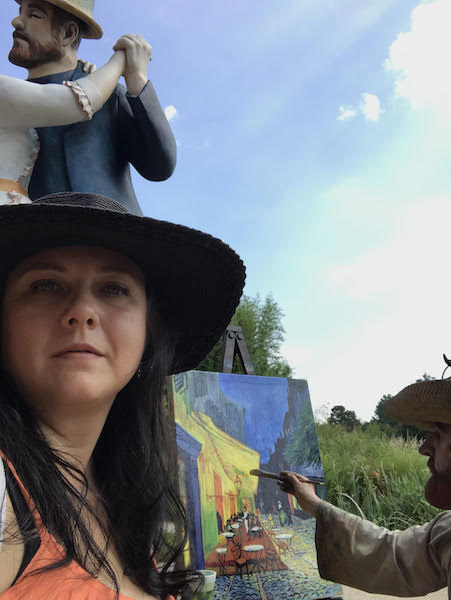 Anca I. Lasc teaches the history of interiors and museum institutions at Pratt Institute, where she is an Associate Professor in the History of Art and Design Department. Her greatest passion is to advise graduate students, and she is very proud of her students’ achievements to this day. Trained as an art and design historian of nineteenth-century France, Anca’s publications range from articles and chapters in peer-reviewed journals to edited volumes (Designing the French Interior: The Modern Home and Mass Media, 2015; Architectures of Display: Department Stores and Modern Retail, 2018; and Visualizing the Nineteenth-Century Home: Modern Art and the Decorative Impulse, 2016) and her single-authored study Interior Decorating in Nineteenth-Century France: The Visual Culture of a New Profession (Manchester University Press, Studies in Design and Material Culture Series, 2018). This monograph examines how new forms of print media were used to “sell” the idea of the unified interior as a total work of art, enabling the profession of interior designer to take shape. In observing the dependence of the trades on the artistic and public visual appeal of their work, the book establishes crucial links between the fields of art history, material and visual culture, and design history.

Anca’s current projects include Interior Provocations: History, Theory, and Practice of Autonomous Interiors (Routledge, forthcoming 2020) and Appropriated Interiors (Routledge, 2021), two volumes that she has developed with her colleagues at Pratt Institute and which aim to bring together interior design history and theory and interior design practice for the first time. More recently, Revisiting the Past in Museums and Historic Sites (Routledge, forthcoming 2021), co-edited with Andrew McClellan and Änne Söll, examines interventions into period rooms and historic house museums in the twentieth and the twenty-first centuries – from Marxist augmented displays (marksistskaia dopolnitel’naia ekspozitsia) at Peterhof in the 1930s to the serial tv show 1900 House (aired in 1999-2000 on BBC Channel 4 in the United Kingdom and PBS in the US), from Simon Fujiwara’s appropriations of the Anne Frank House in Tel Aviv and Austria to Christmas Displays at Windsor Palace and Winston Churchill’s home.

Her essay titled “The Dry Goods Economist and the Role of Mass Media in the Creation of a Global Window Design Aesthetic at the End of the Nineteenth Century” was published in Design and Agency: Critical Perspectives on Identities, Histories, edited by John Potvin and Marie-Ève Marchand (Bloomsbury Academic) earlier this year.

Who was your favorite professor in graduate school and why? My Ph.D. advisor, Vanessa R. Schwartz. Her work has been a constant source of inspiration both in my research and in my teaching (see especially Spectacular Realities: Early Mass Culture in Fin-de- The Nineteenth Century Visual Culture Reader Siècle Paris, 1998; Cinema and the Invention of Modern Life, 1995; and The Nineteenth-Century Visual Culture Reader, 2004). She has been a continuous tour de force, guiding me in my academic life and always pushing me to do better. However, I don’t think that it all became clear until she showed up to our seminar one day dressed up as a demon for Halloween, after a sleepless night spent on a return flight from Europe.

What nineteenth-century chore would you absolutely hate doing? Definitely supplying water for the family. I hate keeping on clothes that are wet; and a trip to the public fountain before running water was widely available in all urban tenement houses would have not sat well with me. Not to mention bringing all those buckets of water for bathroom use or cooking up the stairs!

What nineteenth-century parlor game would you like to see become popular again? My favorite parlor game, by far, was the tableau vivant. The practice involved the recreation of famed works of art by members of the high society, dressed in appropriate attires and posed for minutes in awkward postures. Aubrey Beardsley’s 1894 illustrations for Oscar Wilde’s Salome (1891), for example, have been recreated as late as the early twentieth-century in parlor stagings such as Winnaretta Singer’s (the American heiress of the Singer Sewing Machie fortune) 1908 Eaux-Fortes. In addition to elaborate costumes, these events often included extravagant displays, lights, and music in order to be attractive.