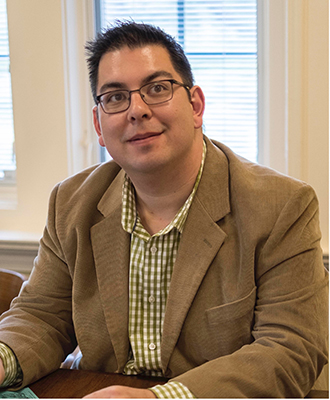 Ryan D. Fong is an associate professor of English at Kalamazoo College, teaching courses on nineteenth- and twentieth-century literatures and in the Women, Gender, and Sexuality Program. He is finishing a book manuscript titled Unsettling: Indigenous Literatures and the Work of Victorian Studies, which is under contract with SUNY Press. Work from this project has been published in Victorian Studies and Victorian Literature and Culture. They are a co-founder of the digital humanities project Undisciplining the Victorian Classroom and were the lead organizer of the recent Dickens Universe conference on David Copperfield and Iola Leroy. As a faculty fellow at the Arcus Center for Social Justice Leadership, Ryan is finishing a three-year project that is working to establish better relations between Kalamazoo College and local Potawatomi tribes.

What story do you always tell your students about the nineteenth century?
My students have definitely absorbed the popular culture vision of nineteenth century Britain: corsets, fancy houses, carriages, balls. This means that they have also absorbed assumptions about its whiteness. As someone who is actively involved in the efforts to “undiscipline” Victorian studies in my research and classroom, I’m constantly telling them about the presence and vitality of writers and communities of color in the century. Instead of saying that it was a period of imperial expansion and exploitation—which, of course, it was—it was also a time when Indigenous and other folks of color resisted, continued longstanding practices, and produced brilliant works of literature and art. Those people have been erased from our popular notions of the “Victorian” (and we talk about how and why), but that doesn’t mean they weren’t there.

If you had the freedom to work on only a research project about the nineteenth century for an entire year, what would it be?
I would rest! In fact, I’ve told friends that what we all need in higher education right now is a universal, year-long sabbatical where we can just pause, reflect, and truly replenish. For me, that would involve a lot of time in my garden and reading completely plot-driven romance novels and mysteries. Nothing research related! To take the question more seriously, I am working on a book project about nineteenth-century Indigenous literatures, and I would love to spend an entire year in one of the sites I’m writing about. This would allow me to slowly build relationships with Indigenous scholars, activists, and artists outside a strict academic context. Since I’m writing about former British settler colonies on the other side of the world from Michigan, forging those relationships in organic and more informal ways is challenging.

What is the best nineteenth-century themed gift you’ve ever given/received?
When I earned my PhD, my husband framed a reprint of the title page to Bleak House as my graduation gift because it was my “conversion text.” I wasn’t a Victorianist when I entered graduate school, and reading Dickens’ novel for the first time in a seminar with my eventual advisor, Catherine Robson, was absolutely transformative. I thought I hated Victorian literature, but the mud- and fog-filled passages of Bleak House’s first chapter completely reshaped the trajectory of my career. The print hangs in my campus office, and is a sweet reminder of that journey, and of my husband.

If you could become best friends with someone from the nineteenth century, who would that be?
I’m writing about E. Pauline Johnson in my book, and I think she would have been a fabulous friend. I’m not sure how emotionally close we would have been—she was a prolific and profoundly driven writer and performer, so she would have been pretty busy—but I have the distinct sense that she loved fashion and beauty and the finer things. I think we could have had a great time together, conversing over tea—or perhaps something a little stronger!