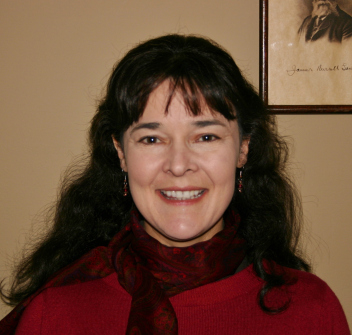 Sarah Wadsworth is an Associate Professor and Director of Undergraduate Studies in English at Marquette University, where she specializes in American literature to 1900, book history, and children’s literature. She is the author of In the Company of Books: Literature and Its “Classes” in Nineteenth-Century America (University of Massachusetts Press, 2006) and coauthor, with Wayne A. Wiegand, of Right Here I See My Own Books: The Woman’s Building Library at the World’s Columbian Exposition (University of Massachusetts Press, 2012). She is currently working on a book about Henry James, periodicals, and American women writers. Her recent article “‘Lifted Moments’: Emily Dickinson, Hymn Revision, and the Revival Music Meme-Plex,” published in The Emily Dickinson Journal (Spring 2014), began life as a conference paper at NCSA. A past president of the History of Reading Special Interest Group of the International Reading Association, she currently serves on the NCSA board of directors and has recently joined the editorial staff of Nineteenth Century Studies.

What historical figure would you love to see in 21st century life? Susan B. Anthony. Anthony accomplished an amazing amount at a time when she had no direct, official political power. In the 21st century, I think she would not only be a powerful voice in national politics but a tireless and much-needed advocate for the rights of women and girls around the world.

What’s your favorite literary film adaptation? Marginally literary, perhaps, and definitely not nineteenth-century, my pick is Adaptation, a quirky, postmodern adaptation of The Orchid Thief, Susan Orlean’s nonfiction account of Florida orchid hunters. It’s more of a meditation on literary adaptation as an unpredictable, creative, and sometimes wildly deviant process than a faithful rendering of Orlean’s text. I love the metacommentary in this film, its humor, its startling clash of literary and popular genres, and its rejection of the idea that an adaptation needs to adhere closely to the original. Besides, Meryl Streep is in it, and she does not disappoint.

What’s your favorite nineteenth-century quotation? Maybe it’s just the end of the academic year looming, but the mix of aspiration, pragmatism, and resignation in these two quotations appeals to me. Ask me in July, and I might pick something different.

Is there anything from the nineteenth century you wished would come back into fashion? Ever since reading E. Nesbit’s The Wonderful Garden in elementary school, I have been intrigued by the Victorian fascination with the language of flowers and, more generally, botany in its everyday, domestic manifestations—botanical drawing, herbology, collecting, flower arranging, posies worn at the waist, and so forth. Since then I’ve learned a little about gardening, written on the language of flowers, and visited many wonderful gardens. There’s a lot to be said for cultivating an acquaintance with the plant- and animal-life of the worlds we live in.