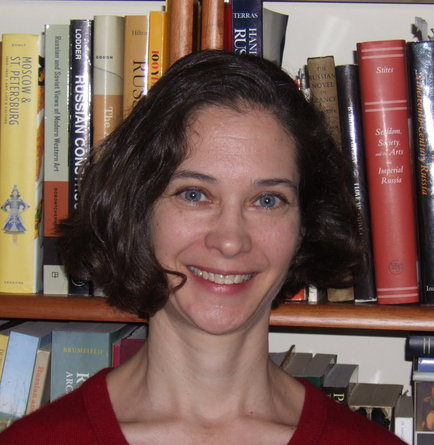 Margaret Samu (pronounced SHAH-moo) teaches at Stern College for Women and Parsons the New School for Design in New York City, and lectures at the Metropolitan Museum of Art. She works on 18th– and 19th-century European art with a special interest in the intersection between Russian and Western cultures. Her co-edited volume (with Rosalind Blakesley), From Realism to the Silver Age: New Studies in Russian Artistic Culture, appeared in June 2014 with Northern Illinois University Press. Her article “Serving Art: Artist and Model in the Ninteenth-century Russian Art World,” was published in Iskusstvoznanie (Art History, a Moscow publication) in December 2014. Margaret is currently working on a book-length project titled Russian Venus, which is based on the dissertation she completed at New York University’s Institute of Fine Arts. She served as president of the Society of Historians of East European, Eurasian, and Russian Art and Architecture (SHERA) from 2013 until early 2015.

What was the last book you read? Jill Lepore’s Book of Ages: The Life and Opinions of Jane Franklin. Lepore’s work on reconstructing Franklin’s biography from the scant information available is truly remarkable, but even better is the way she weaves the material together. She is able to explain the gaps and omissions in the documentation to show their significance to Franklin’s biography, American history, and the history of women.

What’s your favorite literary film adaptation? This is Edwardian, part of the so-called long nineteenth century, not before 1900: the Merchant and Ivory adaptation of E.M. Forster’s A Room with a View. More recently I’ve enjoyed Mr. Turner.

Is there anything from the nineteen century you wished would come back into fashion? I wish we had At Home days, or else regular weekly salons or dinners where our friends would just know to come by, or we would go and expect to see the usual crowd on a regular basis. No invitation, no need to announce that you’re coming, just show up and enjoy. At Home days would of course preclude having a job–and I’m sure the sense of social obligation would get to be a drag–but still it seems like a good way to stay connected. Our social lives are very diffuse nowadays. I would love to start a jeudi, for example, but some of the people I’d want to come live in California, the UK, Russia, Spain, France, and Greece.

What’s your favorite nineteenth-century quotation? “We dream of a journey through the universe. But is the universe not within ourselves? The depths of our spirit are unknown to us–inward leads the mysterious path.” Novalis published this in his 1798 Pollen and Fragments, but his ideas about the subjective nature of truth had a huge impact on 19th-century romanticism.

Which country / decade of the nineteenth century would you like to live in if you could go back in time? I have always felt drawn to Massachusetts in the 1840s-1850s. This probably comes from reading Louisa May Alcott when I was little, and then the Transcendentalists when I was a teenager. The boldness of the utopian Brook Farm experiment still amazes me. Who would do something like that nowadays? Does that kind of idealism even exist among intellectuals today?

Still, I feel fortunate to have lived in the nineteenth century, in a sense, as reconstruction, because that’s how I felt during my ballet career (I danced professionally for about a decade after high school, before starting college). Whether we were performing Giselle (1841) or Swan Lake (1877/1895) or some other work, it felt as if we were recreating an event that had happened in the past–music, choreography, costumes–in which each dancer was taking the role that a whole lineage of dancers had filled before.