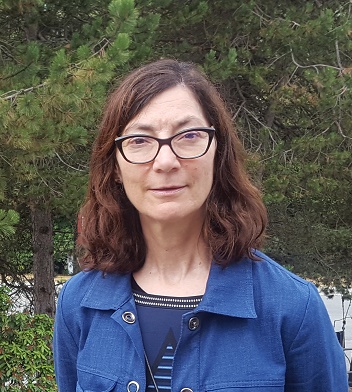 Margaret Linley is Associate Professor of English at Simon Fraser University. She is co-editor of Media, Technology, and Literature in the Nineteenth Century: Image, Sound, Touch (2011). Her most recent work appears in Encyclopedia of Victorian Literature (2015); Transport in British Fiction: Technologies of Movement, 1840-1940 (2015); Victorian Studies (2016); Debates in the Digital Humanities (2016); and European Romantic Review (2017). Her current research project is on Lake District writing and literary ecologies. Part of this work involves a database and digitized corpus of Lake District travel to explore applying digital methods for bibliographic and textual analysis (Lake District Online).

Have you ever had something happen to you professionally that you thought was bad but turned out to be for the best? When I stepped up to the microphone to give my first conference paper, I looked up and there were my parents nodding enthusiastically in the back in row. They had traveled three hundred miles from their farm to hear my paper. That taught me never again to tell my parents where I was giving a conference paper.

If you had the ability to tour the nineteenth century for one hour and you could visit as many places / events as you could, regardless of distance, how would you build your itinerary? So much to see and so little time! I would start in the capital of the British Empire hoping to catch the pulse of the world’s largest city. I’d begin my tour with Henry Mayhew to experience London street-life first hand before heading off to Hyde Park to see the promenade at Rotten Row followed by a quick tour of the Crystal Palace. I’d then fast forward to late-nineteenth London to hop on a night cab with John Utterson, Sherlock Holmes, or maybe Dorian Gray and disappear into the mysterious, deserted streets of East London and Soho. From there, I’d go up to the Lake District, the place Victorians called Wordsworth Country, wishing I had time to take the train from London. I’d stop at Grasmere to catch my breath for a moment and quietly enjoy the poetically infused landscapes that inspired both the nineteenth-century literary tour and modern environmental consciousness. I would then make a quick switch to British North America and Anna Jameson on the shores of Lake Superior in the home of Ojibwe poet Jane Johnston Schoolcraft, or Bamewawagezhikaquay (Woman of the Sound the Stars Make Rushing Through the Sky), to listen to traditional aboriginal stories. Next I’d join Simon Fraser in his canoe on the Fraser River rapids to get a taste of the first successful trip by a European down that treacherous canyon river as it swiftly winds its way to the Pacific. From there, I’d head to the nearby site of present day Vancouver when it was still covered by old growth forest just before the first wave of gold fever washed over the area in the 1858. Then I’d turn to one more iconic colonial moment – Lord Stanley’s speech in 1888 at the opening of Stanley Park on traditional lands of indigenous coastal peoples – before heading much further west to Victorian Hong Kong. But I’m sure my hour would be up.

What is the movie, TV show, or book set in the nineteenth century that has most resonated with you? It is hard to choose but it’s Sarah Waters’s Fingersmith. I love the way Waters simulates the realist novel through her evocative detailed and tender depiction of Victorian London, country houses, and insane asylums and, of course, crime, class, madness and love – recalling the best stories of both Dickens and Collins. The twists and turns of the suspenseful plot play with expectations, immersing us in all the pleasures of the Victorian multi-plot novel while constantly unsettling us with an awareness of the present. Though set in the future, steampunk assimilates nineteenth-century themes in ways that also resonate strongly for me, especially a neo-Victorian novel like Neal Stephenson’s The Diamond Age: Or, A Young Lady’s Illustrated Primer, which cites Dickens and recycles Victoriana in both its form and in elements of its plot, including the namesake of its heroine, Nell. Then of course there’s also Mike Leigh’s classic depiction of late nineteenth-century London and the backstage drama of the theatre world in Topsy Turvy.

What is your favorite mode of nineteenth-century transportation? That would have to be the horse – after all, the nineteenth century was powered by the horse. It’s easy to forget that horse populations increased dramatically throughout the entire century with the growth of industry and manufacturing, transportation technologies, and cities.

What nineteenth-century sound would you love to hear? I would love to hear the impossible, the sound of the Victorian equivalent of the dodo bird: the great auk. Charles Kingsley tried to reanimate the auk’s voice in Water Babies, some twenty years after the last recorded sighting, but anthropomorphism heightens the loss.