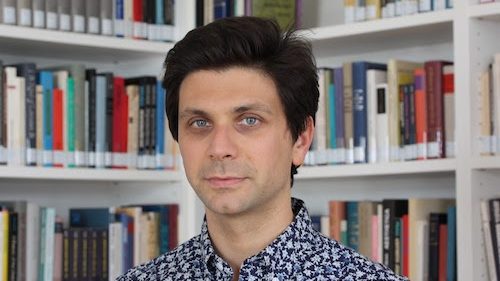 Sebastian Lecourt received his Ph.D. from Yale University and is currently an Assistant Professor of English at the University of Houston. His research focuses on Victorian literature and questions of secularization, colonialism, and comparativism. His first book, Cultivating Belief: Victorian Anthropology, Liberal Aesthetics, and the Secular Imagination (Oxford University Press, 2018), considers a group of liberal intellectuals who debated whether religion was a matter of individual belief or of cultural identity, and shows how this distinction became central to liberal understandings of aesthetic agency. Lecourt is currently working on a second book project entitled The Genres of Comparative Religion, 1783-1927, which considers the role that literary forms played in constructing the nineteenth-century canon of “world religions.” His essays have appeared in PMLA, Representations, Victorian Studies, Victorian Literature and Culture, and other journals.

What is one of your favorite nineteenth-century quotations? Early in my dissertation work I came across this line in Matthew Arnold’s Literature and Dogma: “We are not beaten from our old opinion by logic, we are not driven off our ground;—our ground itself changes with us.” Arnold here is critiquing a certain forensic, rationalistic style of debating religion embraced by both Anglo-American secularism and Protestant fundamentalism. His point is that what changes our worldview is often not having better logic or principles but instead simply knowing more. The fundamentalist’s reading of scripture, for Arnold, is not necessarily refuted by learning about different ancient cultures and their flood sagas, or by knowing the different historical genres of poetry, but it is recontextualized by them in a profound way. I’ve always liked this passage because it gets at a hard-to-define quality of liberal-arts education. Wide-ranging knowledge doesn’t always prove your old views wrong, but it does put what you previously knew in a different context that calls up short any system of ideas you’ve constructed around it. Instead of proving that you were connecting the dots incorrectly, it gives you a lot more dots and obliges you to think about their connections in new ways.

Who was your favorite professor in graduate school and why? I had a number of great professors in grad school. But the mentor who shaped me the most was probably my undergrad adviser at Macalester College, Stephanie Burt. More than anyone else I’ve studied under, Stephanie really practiced pedagogy as the acting out of thought. She would begin with a question, draw together answers from students, write words or pictures on the board, and sometimes even act out figures from our texts (e.g., Elizabeth Bishop’s moose). It was all very zany and expressive, but the point was always to show you how her brain was working—how she took observations, abstracted them into ideas, extended them to organize information, and so on. It modeled a certain way of thinking about texts, but also created a kind of goofy social energy in the classroom that freed other people up to think out loud.

Have you ever had something happen to you professionally that you initially thought was bad, but that turned out to be surprisingly beneficial? I hate to describe this as “beneficial” to anyone or anything, but in my case I would have to say the job market crash the occurred just a couple of years before I filed my dissertation in 2011. The short-term result was that I spent several years doing postdocs at different institutions before finally lucking out and getting a tenure-track job. I got to moonlight in a couple of legendary departments, Rutgers English and the Johns Hopkins Humanities Center; I got to give my first book manuscript a thorough working over before my tenure clock started; and I even got a little bit of a head start on my second book. Above all, those years between grad school and the tenure track made me realize what an important space the research university is and how very easily it could all be wiped away. There is no teaching without research; biology and economics and art history are not just piles of facts that could be conveyed by an app but systems of knowledge that have been cultivated. If we treat research just as a kind of perk of the job, available to few but not really necessary, then we’re destroying the very thing that the university is supposed to curate and disseminate.

What is your favorite form of exercise that was popular in the nineteenth century? Cycling! No contest.