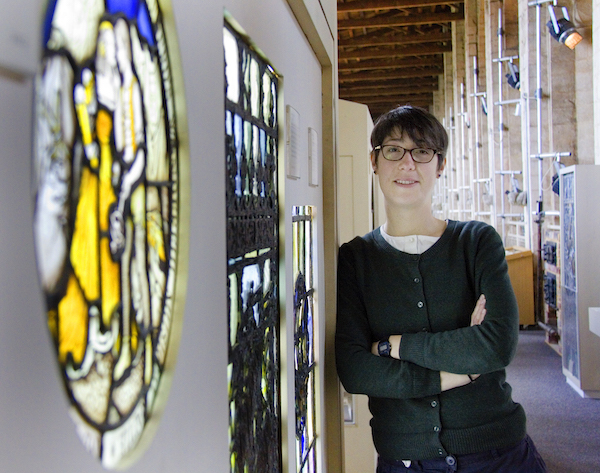 Jasmine Allen is Director and Curator of The Stained Glass Museum, the only museum dedicated to the art of stained glass in the United Kingdom. The museum’s main gallery located on an upper level of Ely Cathedral spans the medieval to contemporary period, with an exceptional nineteenth- and twentieth-century collection, and is located in the majestic heights of Ely Cathedral. Jasmine studied for an MA and PhD in the History of Art Department at The University of York, where she has also taught undergraduate and postgraduate courses in stained glass. She recently published her first monograph Windows for the World: Nineteenth-Century Stained Glass and the International Exhibitions, 1851-1900 (Manchester University Press, 2018). She is currently co-editing a special issue with Dr. Gareth Atkins (University of Cambridge) and Dr. Kate Nichols (University of Birmingham) on nineteenth-century stained glass for the interdisciplinary journal 19 (expected spring 2020). Jasmine also serves as a board member of the Glaziers Trust, the charitable arm of the Worshipful Company of Glaziers and committee member of the London Stained Glass Repository.

Which nineteenth-century text, image, or other work made you realize you wanted to specialize in the nineteenth century? It was probably Lord Tennyson’s 1832 poem “Mariana in the Moated Grange,” which I studied at school along with a number of other Pre-Raphaelite poems. I was particularly interested in the interrelationships between text and image, making connections between the characters and subjects explored in prose and verse by writers and poets and in image through the works of illustrators and painters. The brightly colored Pre-Raphaelite paintings appealed to me because of their vividness and detail. Sir John Everett Millais’ painting Mariana (1851) based on the same character (which interestingly contains a painted depiction of some stained glass) is still one of my favorite paintings today.

What is one nineteenth-century museum collection, historical site, or landmark you visited, and what intrigued you most? In 2010, whilst on a short research to Australia, I visited the Royal Exhibition Building in Melbourne. It was a special visit for me because the building is the earliest surviving main exhibition hall purposely-built for a nineteenth-century international exhibition which remains in situ. It was built to house the first 1880-81 International Exhibition in Melbourne and used again for the Centennial Exhibition in 1888-89, the first exhibition to employ electric lighting. Today the building and exhibition site in Carlton Gardens has World Heritage Site status.

The Royal Exhibition building is constructed of brick, timber, steel, and slate, and over 150 meters long. The architectural styles are an intriguing example of nineteenth-century eclecticism—representing Byzantine, Romanesque, Lombardic and Italian Renaissance influences. The octagonal drum and surmounting dome, 68 meters high, was modeled on the dome of the Florence Cathedral. I was able to gain access to the building which was empty at the time. I remember distinctly the sound of mine and my guides’ footsteps on the polished wooden floors echoing throughout the building. Beams of intense Australian sunlight poured through the large windows. There was something beautiful yet eerie about the emptiness of such a vast space, which was visited by so many thousands and housed exhibits from all around the world.

What is one must-see nineteenth-century destination you would like to experience, and what would you do while there? Of course, it would have to be a visit to the 1867 Exposition Universelle in Paris, one of the largest and most interesting of international exhibitions. I would love to experience walking round the Palais du Champ-de-Mars. This elliptical building was a conceptual design with a central garden with exhibits arranged by classification in concentric bands around it. I’d try and see as much as I could in a day. As well as viewing the fine art display in the main exhibition building in the Exposition Park, I would visit as many national pavilions as I could, before seeing the display of French stained glass and other church furnishings in the gothic church. I’d drop in to see the aquarium, and to top off the day I’d splash out on a balloon ride over Paris.

If you were to join one nineteenth-century revolutionary group, which group would you join? For what cause would you fight? I’d join the Socialist League in the early days, 1884-1889, advocating for social organization, co-operative ventures, a reduced-hours working week, the abolition of child labor, better education, and equality for women. Much of the literature produced by the Socialist League or its members is both internationalist and anti-imperialist in sentiment, which was quite forward-thinking for the time. The Manifesto of the Socialist League, written by artist and socialist William Morris and Ernest Belfort Bax, contains a line which still resonates with me today: “For us neither geographical boundaries, political history, race, nor creed makes rivals or enemies; for us there are no nations, but only varied masses of workers and friends, whose mutual sympathies are checked or perverted by groups of masters and fleecers whose interest it is to stir up rivalries and hatreds between the dwellers in different lands.”

If you could dine in any nineteenth-century palace, restaurant, or café, which would it be? What would you eat? And who would join you? Instead of going to a public restaurant or café, I would try and get myself invited to Benjamin Waterhouse Hawkins’ New Year’s Eve dinner party in 1853 held inside a giant model of an Iguanodon. I would need to blag my way in, since all the other attendees were men—many of whom were involved in the project to create the world’s first-ever three-dimensional life-sized model dinosaurs, destined for the park at Sydenham, where the Crystal Palace building was relocated in 1854 following the Great Exhibition of 1851. Breaking yet more rules, I’d have to bring back (from the grave) Mary Anning the fossil collector to accompany me to this novel dinner party in a dinosaur. Anning’s discoveries of fossils from ancient reptiles furthered our knowledge of prehistoric creatures, but she died just 6 years before Hawkins and Richard Owen’s project to recreate some of the prehistoric mammals and dinosaurs that she had helped discover. As for what we would eat, well I think we’d partake in the eight-course menu served that evening, which for the most part does look rather good.

Many of the Crystal Palace “dinosaurs” survive today in Sydenham Park. Although we now know that the Victorian palaeontologists three-dimensional representations were not very accurate, they are a rare insight into how new discoveries captured the minds of nineteenth-century academics and brought them to life with the dual purpose of education and entertainment.