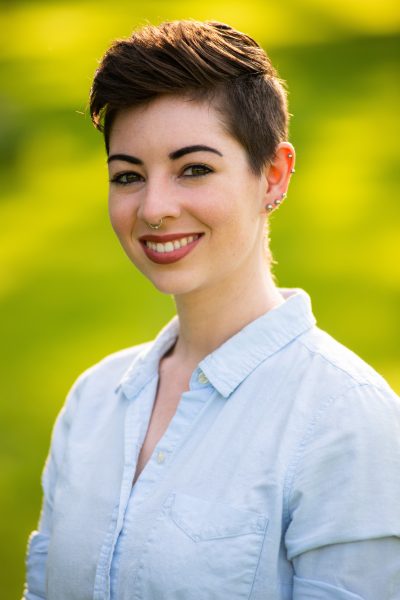 Leslie Leonard is working towards a PhD in American Literature and American Studies (defending in March 2022). Leslie’s discovery of an unpublished text by Frederick Douglass appears in the fall 2021 issue of J19. Leslie is currently using an Andrew W. Mellon short-term research fellowship at the Massachusetts Historical Society in order to critically engage with the emergent idea of personal responsibility in the nineteenth century, particularly as it conflicted with established norms of individual duty.

Which nineteenth-century text, image, or other work made you realize you wanted to specialize in the nineteenth century, and why? This one’s really hard! I remember Wuthering Heights made a real impression on my middle school reading habits (thank you Laurence Olivier), and Whitman was huge for me in high school, but I don’t know if there’s one text that finally convinced me to study the nineteenth century. It honestly might have been “The Sandman” by ETA Hoffman, which is such a cool, weird story. I think after seeing that and stuff like “The Man That Was Used Up” and A Long Fatal Love Chase I realized how fun and weird nineteenth-century texts could be.

If you could share one exciting teaching tip for a nineteenth-century text, image, or other work you know well, what would it be? I think I presented on this at a conference once, but I find Whitman really fun to teach. Other texts are necessary or difficult or eye-opening for students, but Whitman is often just a really good time. Not to get too Dead Poets Society about it, but I think the best way for students to read his poetry is to have a physical copy and to spend time with it like Whitman himself suggests (“Is it night? Are we here together alone?”). Reading his work should be a physical, visceral, erotic, passionate, weird experience so whatever you can do to replicate that for students is great for helping them realize the interconnected relationships between author and text and reader.

What is one nineteenth-century museum collection, historical site, or landmark you visited, and what intrigued you most? I don’t know if it’s intriguing really, but it left a lasting impression. I’m originally from Alabama so civil war sites and antebellum houses are huge sightseeing destinations there. When I was in early high school I visited Belle Meade in Nashville. It’s a former plantation and, aside from an historical site, it’s now a winery and posh destination place, which is horrible. I also remember that there was a part of the grounds that took huge pains to try to emphasize how benevolent the slavers were. Between that and the fact that people were ordering brunch at a literal plantation it was really awful. Obviously, none of this is new or surprising now, but it was to fourteen-year-old me.

If you worked in the natural sciences in the nineteenth century, what would be your area of specialization, and why? This is the best question. Botany absolutely. Chlorophyll, photosynthesis, and basic plant genetics had just been discovered so you have such a cool transition from people knowing how plants grow on a practical level to now understanding how they work mechanically and scientifically. Plus, I would love to work with plants – Whitman always makes them sound so sexy.

If you were to join one nineteenth-century revolutionary group, which group would you join? For what cause would you fight, and why? I don’t know that there’s really any other answer besides abolition. Hell, we’re still working on abolition. Chattel slavery and its effects were thedriving mechanisms and the horror of the U.S. nineteenth century. I don’t know that anything else comes close. I mean we live in the afterlife of slavery right now – it’s all around us and built into our institutions – we’re still working on abolitionist projects and still battling constant anti-black violence.