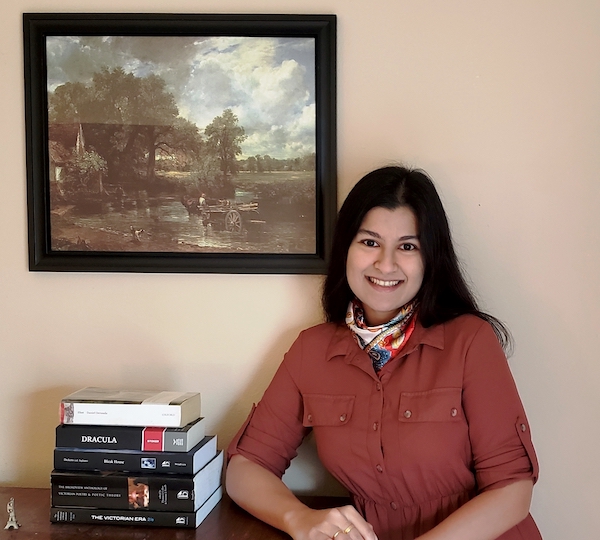 Riya Das is Assistant Professor of English (British/World Literature) at Prairie View A&M University, a public Historically Black University in Prairie View, Texas. Riya completed her PhD at Binghamton University, SUNY. She specializes in nineteenth-century British literature with an interest in gender, empire, and narrative form. Her work has appeared in Texas Studies in Literature and Language and Nineteenth-Century Gender Studies. Riya received a National Endowment for the Humanities grant for her first book project, Women at Odds: Indifference, Antagonism, and Progress in Late Victorian Literature. Her book will reassess female solidarity in the Victorian novel and demonstrate the role of strategic antagonism and indifference in fashioning female progress.

Which nineteenth-century historical event has been most influential for your work and for your thinking about the nineteenth century? While doing research for a British literature course as an undergraduate, I came across The Married Women’s Property Acts. The 1870 Married Women’s Property Act, in particular, deeply influenced my research on late Victorian literature and gender. The act released nineteenth-century women from coverture and allowed them to legally own their earnings and property, a right that I had always taken for granted.

This eventually led me to look into the next transitional phase for nineteenth-century women, from the household to the workplace. The fin-de-siècle professional woman (also called the New Woman) was keenly aware of her socio-economic disparities with poor, working-class women already in the labor force. And unlike the mid-century domestic woman represented in numerous Victorian marriage-plots, the New Woman was not forging domestic female friendships and hoping for a financially secure marital life. Her goal, as late Victorian novels show, was to be financially independent and pragmatic in her choice of partner. While The Married Women’s Property Acts allowed married women to gain control of their wealth, the New Woman movement envisioned professional Englishwomen in control of their financial and marital futures. As the book I am writing will show, the New Woman achieved this feminist progress for herself through erecting and maintaining firm socio-economic barriers with strategic antagonism and indifference

What is most difficult and what is easiest about teaching undergraduates about the nineteenth century? For me, the most difficult aspect about teaching undergraduates about the nineteenth century, especially nineteenth-century British literature, is changing their preconceived notions about nineteenth-century society. For many, the term “Victorian” conjures images of an old-world, low-tech society where most people (especially women) had few rights and led simple lives. So, it takes a while to guide students toward a nuanced understanding of the period that saw incredible scientific advancements and notable strides in gender equality, amidst the socio-political realities of a vast colonial empire. I do this by introducing students to a mixture of real nineteenth-century people and literary texts. A figure such as Felicia Hemans is very effective in this regard. On one hand, Hemans was a single mother writing to support her children. Therefore, her life notably represents women’s progress. On the other hand, Hemans penned “The Homes of England,” a paean to English domesticity and tradition, despite her own unconventional life. This helps students living in our twenty-first century polarized world realize that progress and tradition were not mutually exclusive in the nineteenth century.

The easiest thing about teaching undergraduates about the nineteenth century is a gift from nineteenth-century writers—the profound and gripping nature of their writing. Perhaps I am biased, but no one else has told us simple, human stories with as much intricacy, elegance, and passion as nineteenth-century writers. Thus, nineteenth-century narratives can affect a wide range of global audiences, including those with absolutely no background in the period’s literature or history. Every time I teach Elizabeth Gaskell’s Cranford (1853), my students immediately fall in love with its intriguing characters and brilliant comedy. More importantly, they begin rooting for Miss Matty long before I conclude my lectures on the novel’s nineteenth-century context and Gaskell’s views about women’s rights or industrialization. “I see myself in Miss Matty,” a student once remarked, “sometimes unable to stand up for myself in the presence of others who are more confident, but hoping for peace and love for all.” Nineteenth-century literature will do that to you, no matter what.

If you were an artist in the nineteenth century, what would your medium be? And what or who would inspire you? If I were an artist in the nineteenth century, my medium of choice would be photography. As a child in the late 1990s, I inherited an old camera, which had a detachable flash, and took my first photographs as an amateur. I had to wait until the whole film roll had been used, then carefully spool and remove the roll and take it to the store for the photos to be developed—quite a test in patience today as I have succumbed to the instant gratification provided by smartphone cameras. The twenty-first century brought me my first digital camera and, soon enough, a scanner, which I promptly used to digitize some of the photos taken by my first camera. Having lived through our very own fin-de-siècle and readily embraced the transition from photographic film to digital images, I see myself participating in the nineteenth-century popularization of photography. On that note, in an undergraduate humanities course, I recently taught about Lady Clementina Hawarden and Julia Margaret Cameron, two nineteenth-century photographers with vastly different approaches to their art.

What form of nineteenth-century transportation would you most like to experience? I would love to take a nineteenth-century train. In fact, regular travel by train is the one thing I miss in the United States. Growing up in Kolkata (previously Calcutta), India, most of my trips within the country would begin at Howrah Junction, built and opened to the public in the 1850s. So I have indirectly experienced the nineteenth-century railway system through this historical railway station. But if I were to find myself transported to the nineteenth century, I would definitely brave a ride on a steam locomotive.

If you could hold any political office or sit on any throne in the nineteenth century, which would it be? I would sit on the British throne, and then get up and travel. Queen Victoria did not travel much, despite the extensive breadth of the British Empire during her lengthy reign. I would like to remedy that by traveling to nations across the globe in addition to the few European countries she visited. Who knows how the trajectory of the British Empire could be affected by the awareness that only travel can engender?