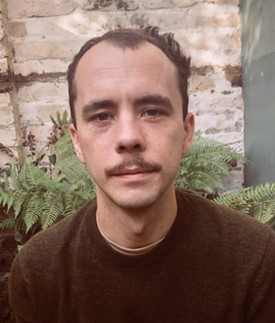 Nicholas Robbins is Lecturer in British Art 1700-1900 at University College London, where his teaching and research focus on the scientific and ecological significance of art. He is currently working on a book, The Late Weather: Art and Climate in Nineteenth-Century Britain. An article related to this project, on John Constable and Luke Howard, was awarded the Emerging Scholars Award from the Nineteenth-Century Studies Association in 2022.

What story about the nineteenth century do you always tell your students?

Mike Leigh told it better than I could, in his film Mr. Turner, but I like to tell the famous story of J.M.W. Turner and John Constable’s stand-off in the 1832 exhibition of the Royal Academy. Turner was famous for finishing his paintings at the last minute during the so-called “varnishing days,” just before the exhibition opened. Turner took the opportunity to show up Constable’s painting The Opening of Waterloo Bridge by adding in a bright red buoy to his seascape hanging next to it – and against Turner’s verve and economy, at least to viewers then, Constable’s hard-won painting was eclipsed. It’s a great story in part because it highlights the contingency of works of art which, to us now, seem so settled in history.

What is your favorite nineteenth-century indoor or outdoor activity?

One of the subjects I work on is the building of greenhouses in botanical gardens, and so I like to go visit the Palm House at Kew as often as I can. It never ceases to be strange: the feeling you have upon entering the warm air, the mossy growths on the ironwork, the densely packed specimens and slowly wandering tourists, all of us not really sure what we are supposed to be doing there. It probably felt similar in the late 1840s when it opened, though the plants were not as large yet of course. The powerful sense of disjunction I feel going into these structures does seem like one way of bridging the historical gap between myself and objects I study.

If you could borrow any nineteenth-century painting from a museum for one year and hang it in your home, what would it be and why?

This is a hard question to answer, of course! Maybe I would just say one of the most recent paintings I saw that has stayed with me (but is also something I would be willing to look at each day): Winslow Homer’s The Life Brigade which was recently on view at the Metropolitan Museum. It’s a very small painting, but arresting, in the way so many of his paintings are – the strange pink glimmer on the wet ground, the framing of the stormy sea by two brown walls. I would like to have some time with it so I can figure it out.

What is the most moving, heartbreaking, or joyful archival discovery you have made?

During graduate school, I was at the National Archives in Kew looking at some documents about the Colosseum, which was the structure built in the 1820s to house Thomas Horner’s large panorama of London. I unexpectedly came across a trove of noise complaints submitted by neighbors – complaining about the disorderly conduct of the visitors, the music they played inside, even the peacocks kept on the grounds whose screeching was ruining the health of a nearby resident. On the one hand, I found them fascinating. On the other, there was something depressing to me about the way all of these complaints, and the responses to them, had been neatly collated, dated, archived, and kept for 200 years – these slight, cranky objects. It was in a roundabout way a very strong experience of understanding the power that shapes archives.