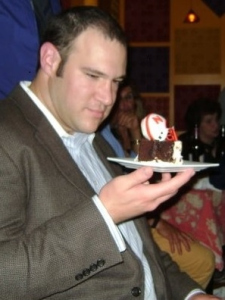 Cameron Dodworth currently teaches at Spring Hill College, the University of South Alabama, and the Alabama School of Mathematics and Science. However, he recently accepted a tenure-track position as Assistant Professor of nineteenth-century British literature at Methodist University, beginning in the fall. Cameron has two articles coming out later this spring, “The Strokes of Brush and Blade: How Basil Hallward Executed Dorian Gray in the Style of Naturalism” in Studies in Gothic Fiction and “Haunted Tomes, Haunted Canvases: Supernatural Realism in Nineteenth-Century Novels and Paintings” in Supernatural Studies. He has also had articles published in Brontë Studies and the Victorians Institute Journal Digital Annex.  His research interests include Gothicism, nineteenth-century literature and art (particularly Realism, Impressionism, and Naturalism), women’s studies, adaptation studies, and food in literature. Cameron has worked professionally as a line cook, prep cook, and banquet cook since the 1990s, and it is the topic of food in literature on which he will be presenting at this year’s NCSA Conference in Boston.

If you could go back to the nineteenth century to change one thing, what would it be? Well, assuming that single-handedly enfranchising women would likely have been a bit too tall of a task, I would probably go for something smaller, like nipping the nineteenth-century aspic fad in the bud. How anyone found gelatinous meat dishes even remotely appetizing is beyond me.

What historical figure would you love to see in 21st-century life? I would actually love to see Vincent van Gogh live and work in the world of 21st-century art. I would think that he would thrive in today’s art culture. I would hope that he would have been a much happier and less angst-ridden person, and I would assume that his work would have been much more appreciated in its time. Also, with modern developments in plastic surgery and facial reconstruction, maybe people would finally be able to get over the ear mutilation thing.

Who was your favorite professor in graduate school and why? Dr. Laura White at the University of Nebraska-Lincoln. She would eventually become my dissertation adviser, and I very much appreciated her honest and even sometimes rather blunt criticism of my writing, even though it might not always have been what I wanted to hear. Even earlier, when I was a Master’s student, I appreciated the advice that she gave me, and enjoyed those rare departmental and conference social occasions when we could talk a bit over a couple glasses of wine. And really, I think that I eventually put the poor woman through a gauntlet of annoyance with my sporadic dissertation writing. Sorry, Laura!

What’s your favorite literary film adaptation? In order to answer this question, I have to give a little background. This past summer, I was chosen to participate in a National Endowment for the Humanities Summer Seminar in Santa Cruz, CA, focused on teaching Charles Dickens through adaptation. One of the two main originary Dickens texts that we explored during the seminar was my favorite book, A Christmas Carol. So, even though my answer might seem lame by giving multiple answers, they are all, as we discussed in the seminar, adaptations of A Christmas Carol, and are also great films: It’s a Wonderful Life, Groundhog Day, and The Muppet Christmas Carol. And I have to give a shout-out to the director of the seminar, Dr. Marty Gould of the University of South Florida, and thank him for turning me on to adaptation studies. It really was a fantastic seminar.

Is there anything from the nineteen century you wished would come back into fashion? Aspics. So that more people would know what I’m talking about when I make fun of them.