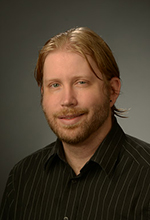 Jude Wright is a Visiting Assistant Professor at Loyola University Maryland. His research is focused on British literature of the long nineteenth century with an emphasis on epistemology and the relationship between realism and fantasy. His work has been published in Victorians Institute Journal, and Cahiers victoriens et edouardiens. He has just completed a book entitled Of That Transfigured World: Realism and Fantasy in Victorian Literature which examines the complicated relationship between realism and fantasy in the works of Dickens, The Brontës, Walter Pater, and Oscar Wilde. Dr. Wright is also beginning the preliminary research stages for his next project, an examination of the reciprocal relationship between Victorian and Modernist literature and early anthropological theory. He also has a significant interest in adaptation theory especially as it relates to film and drama. His most recent article “Listening to the Monster: Eliding and Restoring the Creature’s Voice in Adaptations of Frankenstein” will appear in the Journal of Adaptation in Film and Performance 8.3. When not waxing academic he enjoys hiking, theatre, and well-made beer.

What historical figure would you love to see in 21st-century life? Oscar Wilde. A lot has been written about how Wilde prefigures our contemporary age and much of that is true. It wasn’t until the latter half of the 20th century that Wilde’s critical sophistication was entirely appreciated. I think, in a sense, theory had to catch up with him. Still I’d be interested to see how he well he bridges the gap between the Victorian era and the Modern if he were actually alive and involved in it. But most importantly, I think he’d kill on Twitter!

Who was your favorite professor in graduate school and why?I had many wonderful professors over the course of my graduate study, but there are two that I really need to point out. Dr. Marty Gould at the University of South Florida is one. Marty was my dissertation director and he has a tremendous comprehensive knowledge of the field combined with the ability to push students further in their understanding of it. Working with him on the dissertation was one of the hardest and most fulfilling things I’ve done in my academic career and he pushed me to excellence while also being pragmatic and compassionate.

I also have to mention Dr. Robert Stanton from Boston College. I’ve known Robert since the first semester of my Master’s program (a startling ten years ago) and he has been an amazing supportive person in my life ever since. His love of his work, his good humor, and his genuine care for his students greatly impacted me as I sought to forge my own identity as a teacher and a scholar.

What’s your favorite film based in the nineteenth century? Like the last question, I’m going to cheat and give two. I really like Angels and Insects, the 1995 adaptation of A.S. Byatt’s novella Morpho Eugenia. Mark Rylance and Kristin Scott Thomas are both great and it captures Byatt’s attention to detail beautifully. It has lovely cinematography and presents the fascination that the natural world held for the scientifically minded mid-Victorians quite well.

I love Ken Russell’s Gothic for almost the opposite reasons. It is a grandly ridiculous vision of the Shelley circle’s famous story-telling contest that led to Frankenstein. It is ludicrous with scenery-chewing over-the-top performances from Gabriel Byrne as Byron, Julian Sands as Shelley, and Timothy Spall as Polidori. Mary Shelley is played by Natasha Richardson in what is actually a very good performance despite the overheated script, direction, and music (an electronic score by Thomas Dolby!). The film actually captures something of the mythologization that both scholars and popular culture have built around these figures and in particular that dreary night in Switzerland. I’m fascinated by that myth-making process which really begins with Shelley’s 1831 preface and continues to grow and be revised. Gothic presents that myth in an amazing hyperbolic form.

Is there anything from the nineteenth century you wished would come back into fashion?The triple-decker novel! I love large, sprawling narratives. In the Victorian era, form really did help dictate content and it led to broad and deep thinking in Victorian literature. Dickens’s great question throughout Bleak House is “What connection can there be?,” referring to moral connections between different characters across class and geography. The vast space of the three volume or serialized novel provides a format for exploring those connections and that is something I think we can use in any era, but especially now as we become more and more closely connected by communication, yet isolated by our curated data-streams. While the form of the long novel hasn’t disappeared, I’d love it to somehow become truly fashionable again.

Which country / decade of the nineteenth century would you like to live in if you could go back in time?I love my field, but I have to first note that, I really wouldn’t want to go back in time. For all the things I enjoy about the era, I’ll still take modern medicine, advances in social justice and civil rights and other 20th– and 21st-century developments over some of the interesting aesthetics I study. As interesting as it sounds like on paper to go back in time to meet figures like the Shelleys or Dickens, I can’t help but imagine that it would somehow be a little disappointing.