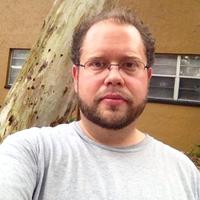 Daniel Brown is currently an underemployed independent scholar. He received his Ph.D. in English, with a specialization in British Victorian literature, from the University of Florida in 2012. His research interests include realism, the novel, poetry, Pre-Raphaelitism, painting, photography, relationships between verbal and visual representation, gender (particularly masculinities), and post colonialism. His recent and first book, Representing Realists in Victorian Literature and Criticism (Palgrave MacMillan, 2016), argues that our understanding of realism came about by way of nineteenth-century writers’ attempts to understand what they saw happening in the visual arts. Other publications include a chapter on Dante Gabriel Rossetti’s portrait poems and visual representations of Jane Morris in the forthcoming collection, Poetry in Painting: The Lyrical Voice of Pre-Raphaelite Paintings, edited by Sophia Andres and Brian Donnelly; as well as chapters and articles in Victorians: a Journal of Culture and Literature (Spring 2012), The Blackwell Companion to Sensation Fiction, edited by Pamela K. Gilbert (Blackwell, 2011), and Nineteenth-Century Gender Studies (2007). Future research plans are to delve deeper into “thing theory” and representations of objects in realism.

In which directions do you think nineteenth-century scholarship should evolve in the near future?: I’d like to see a continuation of the trend towards trying to understand the nineteenth-century on its own terms, as opposed to using the nineteenth century to affirm our own beliefs and assumptions. For example, I like that it’s now the norm to read against the canon and standards of what makes for “good” literature. Understanding what was popular, but perhaps not critically favored, teaches us more about cultural practices than does privileging a few select works that are regarded as exemplifying an arbitrary standard. On the other hand, it’s also important to move away from self-congratulatory scholarship that attempts to affirm how progressive we’ve become, or to assert the validity of a pet theory. The nineteenth century can be a very strange place and grappling with that alterity might help us see the peculiarities of our own culture.

What is your favorite nineteenth-century quotation?: It’s not so much a quotation as a recurring line of dialogue from a character, but I love it whenever Our Mutual Friend’s Rogue Riderhood refers to himself (in numerous variations) as, “a honest man as gets my living by the sweat of my brow.” He’s a scoundrel but he’s also a hustler; as somebody who’s had to get by on a series of contingent gigs and contract work, I can relate to his scrappiness and sympathize with his lack of grace. And, after all, he’s not so far off from being a teacher.

Which country / decade of the nineteenth century would you like to live in if you could go back in time?: I’d like to be a flâneur in 1850s London, Dickens’s London at its most Dickensian. It must have been a fantastic, exciting, lawless mess. Imagine the boundless joys and horrors of processing all that information!

If you could go back to the nineteenth century to change one thing, what would it be?: What strange paradox is this? I like the period for all of its flaws and incongruities, so changing something might ruin that. If I had to, I suppose I’d try to find a way to implore them to tone down on the jingoism just a bit. It gets a bit boring and frankly makes those of us who study the period look back by association.

Is there anything from the nineteenth century you wished would come back into fashion?: The stovepipe hat. I’m thinking of that famous picture of Isambard Kingdom Brunel with the cigar and the massive chains in the background. That’s quite a model of masculinity.