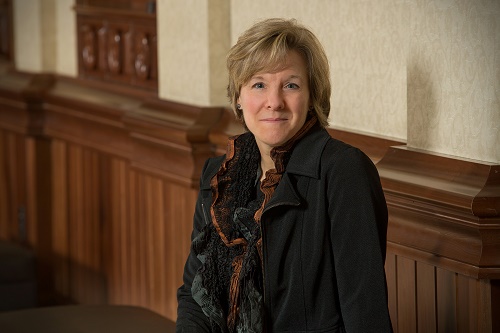 Meegan Kennedy is an Associate Professor of English and Core Faculty in History and Philosophy of Science at Florida State University, where she teaches Victorian literature, history of the novel, and the history of nineteenth-century science and medicine. Her book, Revising the Clinic: Vision and Representation in Victorian Medical Narrative and the Novel (2010), studies physicians’ and novelists’ shared strategies for observing and recording the body. The book focuses on the developing debates over clinical realism; it’s newly reissued in paperback.

She recently received a yearlong NEH fellowship for her current project, “Beautiful Mechanism: The Bounds of Wonder in the Victorian Microscope,” which examines Victorians’ fearful romance with this technology and what she calls the “skeptical sublime.” In other projects, she studies the social and intellectual networks of Victorian microscopy, and examines the interplay in British novels and medicine between visual and numerical narratives (illustrations, figures, tables, and charts) and textual ones.

What was the last experience that made you a stronger scholar-teacher? A recent experience that made me a stronger scholar-teacher was working on the paper I gave on “Canada balsam” (the resin used for mounting Victorian microscope slides) for NAVSA 2017. I’d proposed the paper because NAVSA was set in Banff, Canada, so it seemed an appropriate topic; and I had a hunch that there was more than met the eye to the ubiquitous Canada balsam. However, unforeseen abilities of and uses for this resin kept emerging from the texts I studied, even as I learned more sobering facts about its origins. All of this forced me to rethink my reading of some crucial passages in my chosen texts and juggle multiple (sometimes conflicting) arguments. A paper I thought I understood pretty well became very exciting but also kind of uncontrollable for a while. I learned a lot about Canada balsam, but this experience was also a great reminder of the messy process of writing – an example I can use in teaching.

What is something you learned in the last month about the nineteenth century? I recently researched the Postal Microscopical Society, founded in 1873, for the paper I gave at the History of Science Society on “Circulating Microscopy.” I learned that the members — who only met in person once annually — created “group portraits” by photographing their collated cartes-de-visite. I’d known about their use of the postal system to construct a networked community, but this additional detail helps me think about how technology redefined the nature of personal connection in the Victorian period.

What was the last book you read? The most recent book I read was Diana Holman-Hunt’s My Grandmothers and I. I picked it up on a whim at Daunt Books in London and have really enjoyed this child’s-eye view of a girl being shuttled between her fashionable grandmother and her bohemian one in the early years of the twentieth century. The bohemian grandmother was the widow of the Pre-Raphaelite painter William Holman-Hunt, and that household was an impoverished shrine to his memory, dark to preserve the paintings, and crowded both with treasures that couldn’t be sold and with black beetles underfoot. You can see how forcefully each grandmother impresses her perspective, personality, and arcane rituals on young Diana, and how poorly each one understands her as she struggles (not entirely successfully) to emerge into the modern world. Diana Holman-Hunt had the gift of bringing these households to life, from top to bottom; she was often solitary and looked for friendship with the servants or statues. I found her recollections irresistible.

What was the first nineteenth-century-themed item you bought with your own money? The first nineteenth-century-themed item I bought with my own money was some printers’ type blocks (not old) at a local flea market. The earliest thing I remember owning is a prism from an old chandelier that I was given at an auction — probably to keep me quiet, as I was very young. (That might have been early twentieth century, but I adored it). My parents have an art-and-antiques business and so as a child I was taken about to auctions and antiques stores and learned to enjoy rummaging around in history. The most recent and most exciting nineteenth-century items I’ve bought were a number of Victorian-era microscope books from an English auction house.

These give me a direct link to the microscopists I am studying, and they are also just beautiful books. If you could become any nineteenth-century fictional character, whom would you choose? If I could become any nineteenth-century fictional character, I would like to be someone like Mr. Brownlow in Oliver Twist — with good friends and family, ready access to books, a pleasant, calm house, and a role in helping unravel a nefarious plot. Which nineteenth-century person could you be mistaken for? I could probably be mistaken for Alice in Wonderland: curious and inquisitive, a little bossy, trying to be nice and to do the right thing, generally good in schoolwork but forgetful, and sometimes lost — but finding interesting byways from those exploratory wrong turns. Also, I’m not very good at croquet.

If you had the opportunity to go back to the nineteenth century and have one two-hour dinner with one person, with whom would you want to dine? Who would I would really like to have a two-hour dinner with? If real people, it would be hard to choose between George Eliot and Florence Nightingale. Fictional — maybe Flora Mac-Ivor from Scott’s Waverley. I think she’d be an interesting dinner companion, and maybe she’d lead us on a hike beforehand, too!