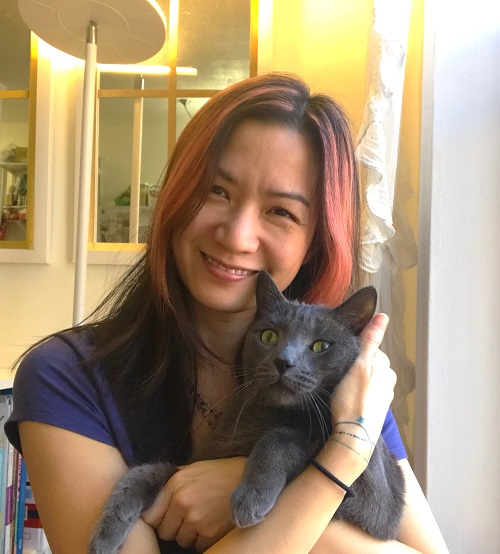 Keridiana (Kery) Chez is Assistant Professor of English at the Borough of Manhattan Community College, City University of New York, where she teaches first year writing, children’s literature, and animals in literature. Her first book, Victorian Dogs, Victorian Men: Affect and Animals in Nineteenth-Century Literature and Culture (2017), explores how the bourgeoisie on both sides of the Atlantic developed the use of animal companions as emotional prostheses. Particularly, the book is interested in novels by Charles Dickens, George Eliot, Margaret Marshall Saunders, Bram Stoker, and Jack London, which participated in producing gender discourses by regulating the degree and manner of intimacy between species. Chez’s other recent projects include essays on the nineteenth-century regulation of animal feed, the gender politics of nineteenth-century pet preferences (cats v. dogs), and the mandrakes in J. K. Rowling’s Harry Potter series. Her research interests encompass animal studies, gender studies, empire, race/ethnicity studies, technoscience/cyborg studies, utopias and dystopias, and American jurisprudence.

Have you ever had something happen to you professionally that you thought was bad but turned out to be for the best? The academic job market is infamously brutal, and more than once I considered whether it had been a mistake to leave legal practice for academia. Thankfully, I continued submitting applications. I’m incredibly fulfilled by my work at BMCC, surrounded by friendly and supportive colleagues and grateful for the opportunity to help underserved students pursue their goals and dreams.

Who was your favorite professor in graduate school and why? Carrie Hintz, my dissertation advisor, is one of the most generous and kind humans I know. She has been an invaluable reader of many drafts and a font of professional advice. Her own work is mainly in eighteenth-century literature and children’s and young adult literature, but I could not have asked for a better match. I tend to work well with a mentor who, like Carrie, is sincere and straightforward about her critique, and more or less leaves me to blunder along on my own, organizing my own schedule and setting my own deadlines. I would check in with her regularly, of course, and her firm hand would right the wandering ship as required. It was empowering to have the space to be self-sufficient while knowing I’d have her support if and when I needed it.

What is one of your favorite nineteenth-century quotations? “If we had a keen vision and feeling of all ordinary human life,” George Eliot wrote, “it would be like hearing the grass grow and the squirrel’s heart beat, and we should die of that roar which lies on the other side of silence. As it is, the quickest of us walk about well wadded with stupidity” (Middlemarch, 1871). I like this quote because it captures different kinds of failure to empathize and gestures toward expanding the circle of moral concern to include other living beings. And leave it to Eliot to call us out on our propensity to kid ourselves.

What nineteenth-century chore would you absolutely hate doing? In the nineteenth century, pet-keeping was believed to encourage empathy and responsibility in children, but then as now, the bulk of the household chores fell to women. Imagine, however, that your household pets included “[t]wo dogs, a cat, fifteen or twenty rabbits, a rat, about a dozen canaries, and two dozen goldfish, I don’t know how many pigeons, a few bantams, [and] a guinea-pig” (as described in Margaret Marshall Saunders’s canine autobiography, Beautiful Joe [1893], one of the earliest animal viewpoint novels published in the United States). Such menageries, called “happy families,” were thought to model the harmony and hierarchy of the well-ordered Victorian household. I can see why, even in an era when pet-keeping became de rigueur, a Philadelphia periodical in 1874 felt the need to particularly cajole mothers into maintaining multispecies menageries for the sake of their children. Even as an ardent animal lover, I can imagine finding tedious the daily tasks that would be required to run my own interspecies “happy family.”

What is your favorite form of exercise that was popular in the nineteenth century? I took a horseback riding class in college and liked imagining myself as a Jane Austen character riding for her health. It looked like it should be easy, but it was not. Even getting on the horse required something like a pull up (or in my case, an ungraceful clamber). The horse was, of course, doing the bulk of the work of getting us from A to B, but staying on and communicating my preferences to the horse required quite a bit of leg and core strength. I would like to say that my style resembled Mary Crawford’s more than Fanny Price’s, but I probably needed a more solid relationship with a smaller horse. (P.S., that college riding course was literally the last time I exercised.)