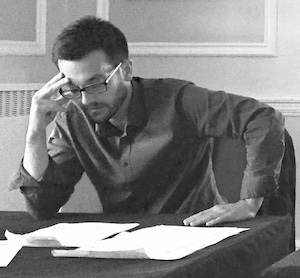 Robert St. Clair is currently assistant professor of French at Dartmouth and the co-editor-in-chief of Parade sauvage, the international journal of Arthur Rimbaud studies published with Garnier. He has authored a number of studies on nineteenth-century French literature, history, and critical theory (and one on Batman), and his first book, Poetry, Politics, and the Body in Rimbaud—Lyrical Material appeared last September with Oxford University Press. He is currently at work on a second book on the question of loss in nineteenth-century French literature and cannot wait for winter in New Hampshire to be over!

Have you ever had something happen to you professionally that you thought was bad but turned out to be for the best? Oh, so many more than space would allow me to list here. My meta-takeaway, in other words, is that it is always best to relinquish our misplaced claims on omniscience and to accept, as best we can or to the degree possible, that the only way to really know how things will shake out, professionally or otherwise, is to keep your head down, do right by yourself, your work, and your friends and colleagues, and wait and see!

If you had the ability to tour the nineteenth century for one hour and you could visit as many places / events as you could, regardless of distance, how would you build your itinerary? Absolutely without question my first stop on this nineteenth-century “back-to-the-future” excursion would be Paris circa 1848—I cannot help, when reading, say, David Harvey’s stunning study of Paris in the nineteenth century, or Eric Hazan’s equally enthralling “L’Invention de Paris,” but find my mind wandering to Paris in the years just prior to the massive transformations in the material space of the city known as Haussmannization. (And, in fact, there’s a specific neighborhood I sometimes daydream about seeing, the one evoked in Charles Baudelaire’s Le Cygne, between the banks of the Seine by the Louvre and what is now the rue de Rivoli, and which was wiped off the map altogether over the course of the Second Empire. That said, it’s probably best such trips are left to flights of fancy—from what I understand, this neighborhood was a bit of a rough one!) I’d also like to see a place like Besançon, which is a city near and dear to my heart for idiosyncratic reasons (not least of which is the quality of the cheese and the white wine—seriously, try a glass of Arbois Savaignin with Comté or, even better, with Mont d’Or if you happen to be in France, or with oysters at the Avant Comptoir de la Mer in the rue de l’Odéon in Paris), but it is also a town that pops up with somewhat unusual frequency in realist novels—Stendhal’s Red and the Black of course, but also Honoré de Balzac’s novella, the object of Roland Barthes’s infamously exhaustive structuralist account, Sarrasine. Stéphane Mallarmé also taught in the high school there in the 1860s. Finally, Charleville in the late summer of 1870, to see if I couldn’t catch a glimpse of Rimbaud vandalizing park benches, the top of the butte Montmartre in Paris on March 18, 1871, to witness the events that led to the Paris Commune, and London (and especially the neighborhood of Soho) circa 1873-78, ground zero of the European left in exile.

What is the movie, TV show or book set in the nineteenth century that has most resonated with you? I found, after having taught it last year, Gustave Flaubert’s Education sentimentale particularly (or perhaps tragically?) resonant for the current cultural and political climate in the west: it’s perhaps straying a bit too far into the territory of the bleak, but the story of an entire generation persistently, frustratingly missing its rendezvous with history on scales both wild and mild, cannot help but strike me in some sense, given the quantity and magnitude of the crises we are faced with, as something of a cautionary tale. (There’s evidence, incidentally, to suggest that Flaubert saw it this way too. Surveying the mind-shaking wreckage of the bloodbath with which the Versaillais forces of order put an end to the Paris Commune in 1871, a kind of hyperbolic repetition of the atrocities that closed out the 1848 civil war, he was reported to have said to his friend, “If only they had read my Education sentimentale, all of this could have been avoided.”)

What is your favorite mode of nineteenth-century transportation? Train travel: one can’t help but wonder what sorts of effects train travel had on the human sensorium in the nineteenth century, whether or not this mode of transportation—with its odd admixture of promiscuity and anonymity, intimacy and alienation (i.e., being in extremely close contact with perfect strangers with whom one is not meant to talk, interact, or even really look at); or take the nauseating, velocity-induced vertigo that comes over you if you try to focus on things too close to the foreground of the window; in a train, your only options are really only withdrawal into the self or fixating on the countryside in the distance—doesn’t have some sort of relation, however oblique, to what Walter Benjamin once described as that “atrophy of experience” so indissociably interwoven with the experience of “modernity” (transportation by train is a frequent motif in Honoré Daumier’s caricatures, for much the same reasons, as I take it, but also in nineteenth-century French poetry from Alfred de Vigny through to Paul Verlaine).

What nineteenth-century sound would you love to hear? The cries of perambulatory merchants whose professions have largely disappeared (though I imagine these probably bore some sonic and rhetorical resemblance to the cries at merchant stands in open-air markets which are meant to get your attention and draw you to a specific vendor’s clementines or salads), the sounds of a city fair/festival, of street singers, of revolution, the gasps coming from the audience that first saw the train coming into the station at La Ciotat on a movie screen.