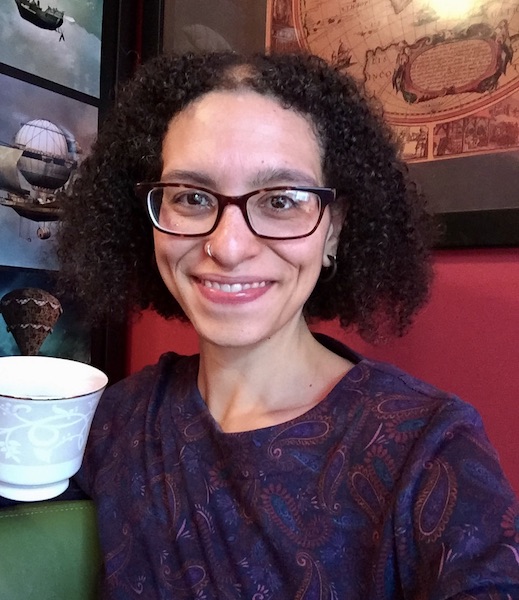 Emily August is an Assistant Professor of Literature at Stockton University, where she teaches courses in British literature and culture of the long nineteenth century, including seminars in medicine and literature, detective fiction, horror fiction, and literatures of crime and criminality. Her research investigates nineteenth-century literary, clinical, and visual representations of the body, and the role of the sciences in perpetuating bodily violence. She is currently at work on an academic monograph that examines how nineteenth-century British subjects were redefining the body in an age of rapid medical innovation. Her chapter “Medicine’s Cultural Power: The Textbook Case of Gray’s Anatomy” (Embodied Difference: Divergent Bodies in Public Discourse, Lexington Books, 2019) uncovers the linguistic, rhetorical, and visual strategies by which the newly-developing genre of the medical textbook cultivated objectivity and authority, and implicitly codified the white male body as normative. She also teaches courses in creative writing and regularly publishes poetry; her poems can be found in Callaloo, Cimarron Review, Missouri Review, Southern Humanities Review, and other literary journals.

Which nineteenth century historical event has been most influential for your work and for your thinking about the nineteenth century? The serial murders attributed to Jack the Ripper, carried out in London during the “Autumn of Terror” in 1888. The murders were a haunting literalization of the century’s ideology of the body, which I argue was characterized by an epistemology of dismemberment. Across the sciences, the humanities, and popular culture, the body increasingly came to be understood as a collection of parts—decontextualized and independently-functioning fragments of organ, vessel, and bone.

Even more than my scholarship, the Ripper case has been influential to my pedagogy. I designed an interdisciplinary course around the case that examines it from several angles of Victorian culture, including crime and criminality, prisons and policing, social class, sex work, immigration, journalism … we even explore the case as the first example of crime scene photography! For generations, studies of the case have been dominated by a focus on the Ripper and his motives, and have perpetuated the narrative of the white male serial killer genius. I explicitly convey to my students how imperative it is that someone like me—a queer woman of color from a low-income background—is retelling this story, taking over this narrative, and helping them understand this case’s textured contexts in new ways.

If you could hold any job or work in any profession in the nineteenth century, which would it be? I agonized over this question! When I eliminated the impossible, whatever remained, however improbable, was: a consulting detective. I’m an interdisciplinarian, and I fancy myself a bit of a polymath (though I’m probably just a dilettante in a tweed blazer). A profession as a consulting detective would allow me to cultivate knowledge across multiple disciplines. I’d be adjacent to all the exciting sciences and technologies that were undergoing cutting-edge development during the century: forensic science, forensic pathology, medicine, psychology, criminology, fingerprinting, mortuary science, etc. I’d have the freedom to use whatever unconventional methods and approaches a situation called for, without being constrained by institutional norms. I’d get to travel to different places and meet different kinds of people, and I’d need to understand situations from multiple perspectives. Like a professor, a consulting detective is just another way of spending a life learning, and sharing your knowledge in ways that help people make sense of things.

What form of nineteenth century transportation would you most like to experience? The Time Traveller’s time machine. But in case that’s cheating, my second choice would be the Metropolitan Railway, or any early iteration of the London Underground. I’ve been taking public transportation everywhere since childhood. It’s also a big part of who I am as a world traveler and tourist. I love experiencing a city’s public transportation system: studying the network map; figuring out how to get various places; people-watching at all different times of day; and just riding a particular line to the end and back, journaling about my impressions. I find it so illuminating to absorb a city’s peoples and cultures via an anonymous, ever-changing population of residents going about their business. Can you imagine what a thrill it would’ve been to ride on the earliest subways? The sights, the sounds, the smells—and that very specific, subtle feeling of being fundamentally interconnected with a bunch of people you’ve never seen before, will never know, and are simultaneously curious about and trying to ignore. It would’ve been a uniquely urban experience in an age of uniquely urban experiences.

Which nineteenth-century smell, odor, or aroma would you most like to experience? This will probably sound unconventional and unsavory, but I’m quite curious about the smell of everyday bodies during the century. There are so many factors that affect the way bodies smell: diet, contaminants, medications, environmental pollutants. All those things are significantly different today than they were during the nineteenth century. And of course, the most notorious difference—at least in the minds of my students—concerns the personal hygiene of the era. But I consider many postmodern hygiene practices to be bizarre, tedious, wasteful, and often ecologically toxic. So, I often find myself wondering how everyday bodies would’ve smelled under different historical conditions.