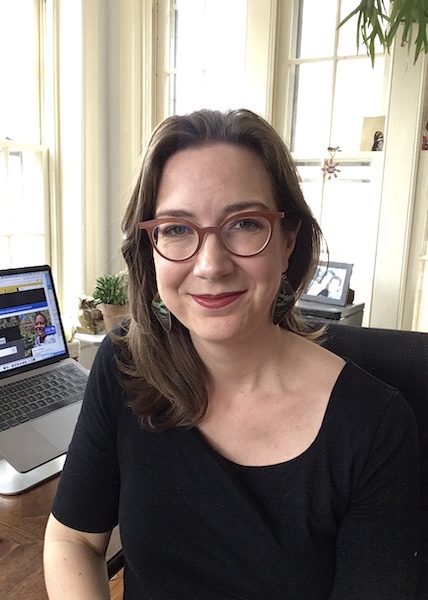 Elizabeth Coggin Womack is associate professor of English at Penn State Brandywine, just outside Philadelphia. She has published work on Victorian literature, material culture, and urban poverty in journals including Victorian Literature and Culture, Nineteenth-Century Contexts, and Victorian Review. She was co-organizer of the postponed 2020 NCSA Conference, “Radicalism & Reform,” in Rochester, New York, now rescheduled for 2022.

What was your favorite discovery / serendipitous moment when conducting research on the nineteenth century? Oh, this one is so old, but I’ve never topped it. Over a decade ago, when I knew absolutely nothing, I was studying representations of pawnbroking as part of a larger study of the secondhand economy in literature. I learned that there had been a weekly trade magazine called the Pawnbroker’s Gazette. There was only one copy available in the US at Northwestern University. I had a little research money, so I decided to go give it a look. The archive turned out to be shut down for a portion of my trip, so I was forced to take a haphazard series of photos from a 40-year run and hope for the best. But when I looked over my materials more carefully, I realized I’d captured all these letters to the editor written by pawnbrokers who were deeply annoyed by their portrayal in fiction. Another thing I managed to capture was a short run of pro-pawnbroking serial fiction—at least some of which appeared to have been written specifically for the Pawnbroker’s Gazette.  Anyway, it was delightfully funny to read and it really enriched the work that became my first article in Victorian Literature and Culture.

What is something you have learned in the last month about the nineteenth century? Thanks to Zoom kindergarten, I’ve lost all sense of time—not to mention actual time—so I can’t say I’ve learned anything new about the nineteenth century in the past month. However, in the past year I’ve been thinking quite a bit about psychic numbing, or compassion fatigue, which I’ve written about in the past and plan to consider more in the future.  Surely this year we have all been transfixed by the inability of so many of our fellow Americans to take the simplest of personal precautions to prevent mass casualty. Consequently, I’ve been thinking more and more about writers like Samuel Taylor Coleridge, Charles Dickens, and others, who wrote angrily about their readers’ sympathy for one tragic fictional character even as they turned away from widely available statistics on slavery or urban poverty.

I do think this moment is going to teach us to think differently about feeling. Quite apart from having borne witness to the larger social issues and divisions of the moment—covid-19, election conspiracy theories, racial inequity, and police brutality—many of us who are social distancing have created and suffered from our little empathy silos. We all know so many folks living with private pandemic torments: the single friend who is achingly lonely, teachers losing their sanity to Zoom, and working parents frantically juggling online school and their own jobs. And it seems that so many of us are acutely aware of certain kinds of pain and blind to others. When I finally catch a moment to read, I know I’m going to read fictional moments of sympathy and failed sympathy differently forever. I’ve just started rereading Carolyn Betensky’s wonderful book on bourgeois compassion, Feeling for the Poor: Bourgeois Compassion, Social Action, and the Victorian Novel (University of Virginia Press, 2010), and I’m eager to dive into more recent work that’s come out on affect—there’s some really great work by Alisha Walters, for starters.

If you were to learn a new nineteenth-century skill, what would it be? I usually don’t pause at the counterfactual stage when it comes to nineteenth-century hobbies; I’ve always got one going. Currently I’m volunteering as a “Grave Gardener” at a nineteenth-century landscape cemetery in Philadelphia called The Woodlands. We use heritage varieties and organic gardening techniques to maintain container gardens in a particular type of tombstone we call a “cradle grave”; the Woodlands has hundreds of them. Some of my fellow gardeners research their deceased “adoptees” and base their plant selections on that research. I’m quite attached to Bell (the 21-year-old consumptive bride I adopted in 2017), but I tend to base my arrangements on English cottage garden varieties I’ve learned about in my professional reading; e.g., “Oh, balsam! I remember reading a temperance tract about an orphan child who grows balsam in a pot shard; I bet that’s easy to grow.” [It is.] More recently, I’ve been reading about nineteenth-century painters and trying out watercolor sketching, which makes me feel like I could be an accomplished lady if I could only afford a drawing master.

If you could witness any event from the nineteenth century, what would it be? Doesn’t everyone say the Crystal Palace? But you said an event, not a place. If I had to pick a day, I’d go with Hyde Park, June 24, 1855. Let me set the stage. The working class was pretty riled up about a new Bill to Regulate Sunday Trading, which was one of a long line of Sabbatarian laws and bills that restricted activities on Sundays. Generally speaking, these were intended to shut down libraries, museums, public gardens, theater, and rail travel on Sundays, and, of course, if you were working class, Sunday was your one day off per week. People with means had private resources for entertainment and were largely unaffected. So for whatever reason, at 3pm on June 24, 1855, anti-Sabbatarian sentiment hit a boiling point, and “large numbers of persons” entered Hyde Park and started menacing the aristocrats in carriages, frightening off the horses, opening the carriage doors and yelling “GO TO CHURCH” in a way that the Times called “discreditable.” It’s not clear to me how big the mob actually was, but by the end of three hours, 116 police were required to disperse it. Every single time I read or think about the “go to church” mob, I laugh out loud. So if I could go back in time and participate in one event, it would be that.  For what it’s worth, I would also like to actually go to church, because I’m a dutiful Episcopalian and it’s been a long year.